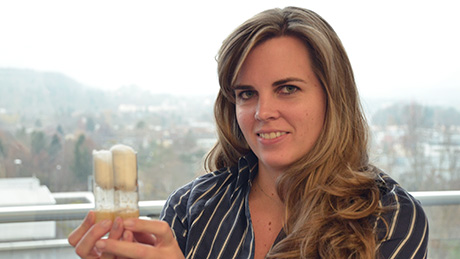 Success with fruit flies: Stefanie Meyer with the subjects of her experiment, bred in jars. (Image: Stefan Stöcklin)

“Things always look easy in retrospect,” says Stefanie Meyer with a refreshing laugh. She pulls her brand-new publication from the current edition of Science and explains the basics of the work she’s been able to publish in the prestigious journal – no mean feat for a PhD thesis.

“First you need an idea to spark it all off, and then successful experiments to verify it,” the molecular biologist explains. After four years of experimenting the young researcher, part of the team headed by Konrad Basler at the UZH Institute of Molecular Life Sciences, can now harvest the fruits of her work together with her thesis supervisor, her colleagues at the lab in Zurich, and her partners at Columbia University in New York.

As is so often the case in science, the idea that sparked it all off was unconventional. “It came to me in the course of my master’s research,” explains Meyer. At the time she was looking into the phenomenon of cell competition in tissues. This is how weaker cells are eliminated by means of a “cell suicide” program, while fit cells dominate.

The means by weak cells are identified and eliminated reminded Meyer and Basler of the way the immune system functions, and led to the idea that both processes might use the same molecular signal paths. On this basis they came up with the hypothesis that the body’s innate immune system doesn’t just defend against outside enemies such as viruses and bacteria, but also eliminates weak or unfit cells in tissues.

To investigate the matter in more detail, Meyer and her research colleagues devised experiments with fruit flies with tissue consisting of both fit and less fit cells. At the same time they genetically switched components of the innate immune system on or off. Using this sophisticated set-up they were able show in countless experiments how fit cells are selected by signal molecules in the innate immune system.

“Our idea turned out to be right,” says Meyer. “Weak cells are recognized and eliminated by components of the immune system.” This process of cell death, also known as apoptosis, is induced by so-called Toll-like receptors in the innate immune system, which is involved in defending the organism against microbial pathogens. In the case of cell competition, the receptor is activated by a special signal molecule called Spätzle.

This surprising name (“spätzle” is a type of egg noodle) was inspired by the unusual shape of fly larvae. Fruit fly larvae were first described in the laboratory of Christiane Nüsslein-Volhard, who was subsequently awarded the Nobel Prize, and are based on the mutated gene for the signal molecule. 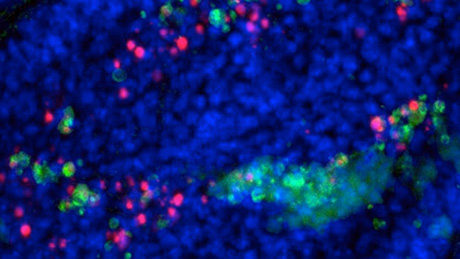 While Stefanie Meyer and Konrad Basler were investigating the principle of cell competition in Zurich, molecular biologist Laura Johnston at Columbia University in New York was encountering similar questions. Unlike her counterparts in Zurich, however, rather than weak cells Johnston focused on rapidly growing cells that are crowding out neighboring tissue. In this case normal cells fall behind and switch on their suicide program.

Johnston and her team were able to show that this elimination process functions practically the same way as in cell competition. Experiments with fruit fly tissue delivered proof that the elimination process also takes place by way of signal paths in the innate immune system. Again, Toll-like receptors and Spätzle are involved.

Cooperating rather than competing

As so often happens in science, the two groups got wind of each other’s work. But they agreed to collaborate rather than compete. In countless e-mails they shared their experimental progress and coordinated the publication of their remarkable findings.

“We could also have published our work separately, but instead we decided to collaborate,” explains the molecular biologist. Given the fundamental significance of their astonishing findings, they both approached the same prestigious US journal with their work. This is how the Zurich and New York groups came to publish jointly in the current edition of Science. Stefanie Meyer shines as the lead author, with Konrad Basler and Laura Johnston senior authors.

Next year Meyer will complete her thesis. Her plans for the future are still vague, but the idea is to continue her scientific career, preferably with a spell as a postdoc in the US. “I enjoy research so much I don’t want to give up now,” says the young scientist.