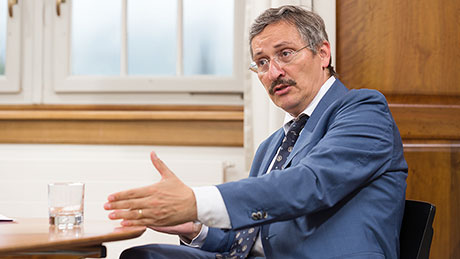 "The Extended Executive Board will represent a greater diversity of voices than it does at present, and the dialogue between the faculties will be closer", says UZH President Michael Hengartner. (Image: Frank Brüderli)

In light of the growing challenges faced by the University, it has to reorganize its governance as a matter of urgency. The internal consultation process for two of the four sub-projects that are part of UZH’s Organizational Development project has already been under way since June. It concerns proposals to restructure the University’s Executive Board, and to revise the rules governing habilitations and adjunct professorships. Now the Executive Board is presenting the third and fourth sub-projects for discussion. They concern the Extended Executive Board and the bodies (Stände).

1. Restructuring the Extended Executive Board

Michael Hengartner, let’s first talk about the Extended Executive Board. Under the proposal, what new powers and responsibilities are to be given to the Board?

Michael Hengartner: The idea is that the Extended Executive Board will now have a say in the strategic development of teaching and studies at the University. Under our proposal the Extended Executive Board would approve the program regulations issued by the faculties. As it has in the past, it would also continue to approve study-related ordinances issued by the faculties (for example framework ordinances) for the attention of the Board of the University.

Why, in your view, does it make sense to extend the powers and responsibilities of the Extended Executive Board with regard to study and teaching?

Because in these areas it’s particularly important for the faculties to liaise when they issue new regulations.

How are major and minor subjects weighted? How many decimal places after the point should final grades have? What language should diplomas be written in? There are many questions of this type, and each faculty has laid down its own rules governing them. In the future the faculties will have to make sure their rules are coordinated with those of the other faculties to avoid placing undue obstacles in the way of students wanting to combine programs from different faculties. To ensure this happens, we need a body above the University’s Teaching Committee to serve as a hub in terms of teaching and studies, and to make sure that the faculties collaborate and coordinate their teaching and study regulations. With the set-up and competences we have proposed, the Extended Executive Board should be able to perform this role.

Program regulations are complex legal texts. Is it fair to expect members of the Extended Executive Board to deal with them in detail?

Why should members of the Extended Executive Board be any less capable of dealing with them than the members of the faculty assemblies that are currently responsible for approving program regulations? Our main aim is for the faculties to work together more closely. That’s why we want the Extended Executive Board, rather than the faculty assemblies, to have the final say on program regulations. If I, as a member of Faculty A, hear that Faculty B is planning to issue new regulations, I can either point out the places where the new rules are incompatible with my own faculty’s regulations, or I can acknowledge that the rules are a good idea and recommend that my faculty follow suit. The faculties should be coordinating their activities more closely than they have in the past, and learning more from each other. That’s the best way of moving UZH forward in organizational terms.

UZH’s highest academic body currently has 18 voting members. The plan is to increase their number to 31. What’s this expansion aimed at achieving?

Our University’s strength lies in its diversity, and this is something we would like to continue fostering. At the same time, though, we want to prevent the different parts of UZH from drifting apart. Since we absolutely want to avoid centralized forms of organization, we have to make sure the faculties take more responsibility for managing UZH, and that they coordinate among themselves more effectively so that the University as a whole remains on course. This applies especially to the way teaching and studies are set up. So we’re proposing that in addition to the Deans who currently sit on the Extended Executive Board, the Vice Deans of Studies also be represented.

It’s very simple: To ensure that the bodies continue to be more or less as strongly represented, comparatively speaking, as they are now.

They’re connected to the extent that the reasons for enlarging the boards are the same: In both cases the idea is to involve the faculties more closely in the management of the University as a whole, and to facilitate more intensive collaboration between the faculties.

The idea of having a representative senate emerged from the need to have a management body that’s big enough to reflect the diversity of voices within UZH but small enough to permit the discussion of fundamental matters – for example the question of what UZH understands by academic career development, or the terms under which UZH could justifiably consider installing a web filter. The full Senate, of which all UZH professors are members, is too big for discussions of this sort.

So why isn’t the idea of a representative senate being pursued after all?

Because it turned out that the professors are very attached to the full Senate in its present form. While the Senate has only one main competence, namely to apply to the Board of the University for the election of the President and Vice Presidents, it does fulfill an important social function as a full assembly of the professorial staff. For this reason we decided to leave the Senate in its present form. Instead we now want to put the Extended Executive Board on a broader basis.

Will the enlarged Extended Executive Board be able to perform the function of the representative senate originally planned?

Yes. Under the set-up proposed by us, the Extended Executive Board would be big enough to reflect the diversity within UZH but small enough to conduct fundamental discussions on strategic issues.

In a nutshell: If the proposed model is implemented, how will it alter the character of the Extended Executive Board?

The Extended Executive Board will represent a greater diversity of voices than it does at present, and the dialogue between the faculties will be closer.

A proposal for reorganizing the bodies is also being put forward for consultation. The idea is to divide the present body of non-professorial academic staff into two new bodies: junior researchers, and academic associates. What would the benefits be?

Under the new plan we would organize the bodies along the lines of the functions or career level of their members. This would make the allocation of members clearer and ensure that each body brought together people with similar interests and concerns. The body of junior researchers would include people in junior academic positions, in other words teaching and research assistants, senior teaching and research assistants, doctoral candidates, and postdoctoral researchers. Doctoral candidates not employed by UZH would also be assigned to this body. Established academic staff actively involved in research and teaching would be represented by the body of academic associates. The body of students would comprise students at bachelor’s and master’s level.

Why would the existing body of Privatdozents no longer exist under the new plan?

The proposal to reform the habilitation and adjunct professorship, which was put forward for internal consultation back in June, makes a body of Privatdozents superfluous. In the future Privatdozents would be represented either by the body of academic associates or, if they primarily work in university administration, by the body of technical and administrative staff. But of course Privatdozents would still be free to organize themselves in an association (Verein) set up on a civil law basis if they so wished. However, such a body would no longer represent a body (Stand) in its own right.

Under the proposal there would be four rather than three bodies involved in deciding the fate of UZH. The fourth would be a new body of UZH administrative and technical staff. What’s the idea behind this proposal?

Given that research and teaching at UZH wouldn’t be possible without service and support, our administrative and technical staff should feel they are fully fledged members of the University community rather than second-class employees. Everyone who works at UZH should be given the opportunity to have a say in how the University evolves and develops. This can only help in terms of the sense of common identity at UZH. Until now, representatives of the administrative and technical staff have been permitted to attend meetings of the Extended Executive Board and other University bodies in an advisory capacity. I have always found the contributions made by these delegates to be constructive, stimulating, and useful. The people who provide these services have a specific view of UZH. This perspective should also be considered in our decision-making processes. For this reason I believe it’s high time that we created a fourth body with rights of co-determination for our administrative and technical staff.

Why aren’t professorial staff organized as a body of their own?

The University’s Executive Board has discussed the possibility of setting up a body of professorial staff. There are precedents for this at other universities. But there is no tradition of this sort at UZH, and my impression is that professorial staff at our University don’t feel the need to change this. This is probably because they already have sufficient opportunities to have their say and take part in the management of the University.

As of recently, the student body at UZH has been organized as a public law entity, enabling it to act as an independent legal entity vis-a-vis the university. Why don’t the other bodies, which are organized as civil-law associations (Vereine), also become public law entities?

The idea of a public law entity might look attractive at first glance. A public law entity is on equal footing with the University in its dealings with the institution as a whole, it can become a self-sustained organization, and it can assert its own rights as a legal entity. A body (Stand), on the other hand, is merely a part of the University. In the case of the University’s staff, however, a solution that works for the student body would be complicated and not very expedient, and would be problematic from a constitutional point of view. These were the findings of a legal opinion we commissioned at the suggestion of the association of non-professorial academic staff.

If you convert the bodies into public law entities, you force University staff to explicitly opt for or against membership. People opting not to join their association will be excluded and no longer represented by the organization. Rather than strengthening them, making the bodies of junior researchers, academic associates, and administrative and technical staff into public law entities would tend to divide and weaken rather than strengthen them.

Until now there have been only two categories of University members laid down in the University Act: The university staff, and the students. The Executive Board proposes including the alumni as a third category. That’s around 100,000 people. Have all these alumni really retained such close ties with the University that they could be described as “members” of UZH?

It depends on how you look at it. My view is that anyone who has ever studied or worked at UZH has been formed by the University and will have a connection to it, even if they haven’t set foot in a University building for years. Our alumni are potentially our ambassadors to the world outside, so we’re increasingly trying to foster contact with them and keep them up to date on what’s going on at UZH. We should learn to view our alumni as part of an extended family. That’s why I’m in favor of addressing them as members of UZH in the future.