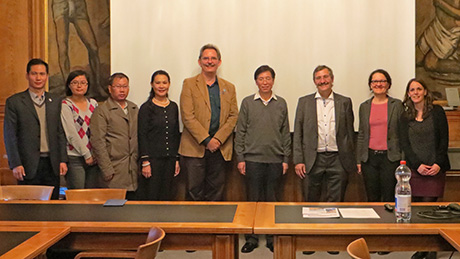 
Jay Siegel, earlier this month you visited the University of Zurich in your function as Dean of Tianjin University. What is your personal view of UZH and Switzerland today, a year after you began this transition?

Jay Siegel: My center of family life is still in Zurich; my appointment is still active and I return regularly to look after operations. Nonetheless, the project in China occupies a good deal of my time and gives me a special perspective to contrast Swiss-Sino operations. I have a very strong sentimentality toward UZH since I was a Fulbright student back in 1983 and throughout my tenure as professor.

Looking at UZH today, I see a much more international place than when I started my Professorship in 2003. I see great changes under the leadership of Rector Michael Hengartner and Dean of the Faculty of Science, Bernhard Schmid. As for Switzerland, it is timeless on the timescale of my life. A long-standing balance between freedom and order has been struck and will not change year-to-year.

Switzerland is a country of great wealth and human resources, which perhaps operates at times more as if it has more worries about things it might lose, than hopes about what new gains are yet to come. China in contrast is a country which, despite many thousands of years of highly developed civilization, has suffered so much cultural upheaval in the last century that it is now struggling to redefine itself and reestablish its position in the world. There the prevalent attitude focuses on what there is to be gained by the next venture with little worry about what might be lost.

UZH and Tianjin University are interested in profiting from your personal network at the Faculty of Science here in Zurich, and both parties have expressed a will to develop student exchange programs. What good do you expect to come from these programs?

Jay Siegel: China is the number one area for education expansion and development in the world. It will soon be the major place for education and research at all levels in the world. Tianjin University is a “985” university in the Chinese system and ranks in the upper 1% of Chinese universities; the students who study here are commensurately in the upper 1% of students in China. Within the university, the School of Pharmaceutical Science and Technology (SPST) is a demonstration project in internationalization and reform – the term “academic freezone” has been coined to represent the kind of freestyle development that is allowed there.

Thus, within the heart of the Chinese higher educational system we have a liaison point for Switzerland which blends a set of cultural values, promotes professional ethics, and allows communication through a common international language. It would be very easy for a Swiss (or any Western scholar) to operate in this research context and at the same time learn about Chinese life, philosophy and culture. Scholars trained at Tianjin would be well prepared to bring their unique training to Switzerland (and the West in general).

Are there any disciplines that are particularly suited for exchange programs?

Jay Siegel: The School of Pharmaceutical Science and Technology in Tianjin is broadly defined to cover most areas of the Molecular Life Sciences as well as PharmacoEconomics. All of these areas will offer instruction and research opportunities in English as the principal language as of September 2015. At that time we will have over 20 new faculty members recruited from all over the world. As such, SPST is a very cosmopolitan institute with new labs, fresh teaching staff and a high passion for research and teaching. Such an environment should be suitable for a broad spectrum of students.

That said, we have a special niche in areas like Traditional Chinese Medicine, Medicinal Chemistry, and Pharmacoeconomics. These areas can provide students with an international level of excellence in research. TCM has important connection to plant science, molecular genetics, synthetic biology, and natural products chemistry. Medicinal Chemistry overlaps with many areas of mainstream chemistry and pharmacology. Pharmacoeconomics has direct ties to business and management (not to mention policy and law). All of these areas would be ripe for strong scholar exchange programs between Tianjin and UZH’s faculties of science, business, law, and medicine.

What are the differences between science studies in China and Switzerland?

Jay Siegel: China is still a developing country and education is focused more on mastery of skills and facts with a preference for engineering outcomes. Although China can develop very fast in private sector areas such a fashion, movies, manufacturing and finance (young and vital areas with many fresh new movers and shakers), the educational institutions move at a much slower pace and in some ways bear the inertia of the appointments from decades earlier.

The new generation of scientists in China are dominated by returning Chinese who studied abroad and drank deeply from the cups of curiosity driven research and inquiry based learning by doing; however, all too often these young scholars do not get to express their passions fully due to antiquated hierarchical university structures.

One thing that makes SPST special in China is that the balance of new to old teaching staff is heavily weighted toward the new; furthermore, the organizational structure of SPST is rather flat and without departmental camps. I firmly believe that if given a broad opportunity to operate within this kind of open inquiry-based learning system, the Chinese scholars will compete on par with the Swiss in the coming decade.

Jay Siegel, how do you like living in China?

Jay Siegel: I love living in China, as I love living in Switzerland – perhaps best said I love living as long as there are active and creative experiences through which to feel alive.  My goal is to be a liaison between Switzerland and China, to learn more about the Chinese system and then bring closer the connection between China and Switzerland. My joy for living in both places makes me all the more motivated to give back to Switzerland the ideas and energies I accumulate in China. As I said in the opening question, I have not really left Switzerland; I am on an exciting expedition abroad that I anticipate will allow me to feed back many positives to my roots in Switzerland. Exactly this kind of research-bridge between Tianjin University and UZH is an embodiment of that spirit.

null Tianjin University nullFrom 2014 to 2017, Jay Siegel and Kim Baldridge will take up the charge at the School of Pharmaceutical Science and Technology (Jay Siegel) and the unit High Performance Grid Computing (Kim Baldridge) at Tianjin University, which is considered the cradle of the modern Chinese university system. It was established by the Emperor in 1895 as Peiyang University at the behest of Chinese entrepreneur Sheng Xuanhuai and American Educator Charles D Tenney. nullIn November, Siegel and Baldridge lead a Chinese delegation including Tianjin University President Jiajun Li to visit. The delegation was received by Rector Michael O. Hengartner and Bernhard Schmid, Dean of the science faculty. The visit was organized by the University of Zurich’s International Relations Office. null