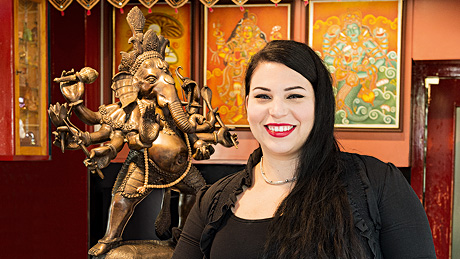 The International Relations Office at the University of Zurich organizes paid internships at Swissnex, a Swiss network of science and technology outposts in the world’s most innovative cities. UZH graduates with a Master’s degree can take advantage of an internship to act as UZH ambassadors and strengthen the University’s international network. Journal met up with three alumni upon their return to Switzerland.

At the high-tech heart of India

Michelle Hufschmid didn’t have to think twice before answering the ad for a Swissnex internship in Bangalore. The historian had just returned from a private trip to Asia, during which she visited the Indian sub-continent and, having earned her Master’s degree, was in the process of applying for a doctorate: The internship could not have come at a better time. The requirements included English skills, knowledge of India, and the willingness to represent the University of Zurich; the overarching goal of the six-month sojourn was to raise UZH’s profile in the host country. In September 2013, after being selected for the position, she jetted off to the southern Indian city with a population of over a million to take up her position at the Swissnex office in the heart of Bangalore.

Supervised by Maitree Dasgupta, the officer responsible for academic relations and projects, the Swiss intern got down to work. Hufschmid’s main project on behalf of UZH was to help organize a multi-day life-science workshop entitled Frontiers in Biology and Medicine, which was held in Bangalore in February 2014. The workshop provided an ideal platform for new collaborations between scholars from the Indian research institutions involved and the University of Zurich.

The workshop’s success was not least due to Hufschmid, who orchestrated it meticulously. But, she relates, it was hard work. Organizing anything is extremely time-consuming in India due to the long distances in cities and endless red tape. But Hufschmid did not only work on projects for UZH during her time in India. She also had the opportunity to organize a cultural event for two artists from western Switzerland on the Swissnex premises – yet another resounding success.

Despite taking a skeptical view of internships on the whole, Hufschmid is satisfied with her experiences in Bangalore. In addition to valuable work experience, she also gained a glimpse into the Indian way of life during her six-month stint, something travelers don’t usually get to see. She shared a flat with an Indian and an American of Indian descent, and experienced everyday Indian life, learning to find her way around the giant, bustling city and how to bargain with drivers and traders. The internship was a life experience that is bound to stand her in good stead when she embarks on her PhD studies in Oxford. 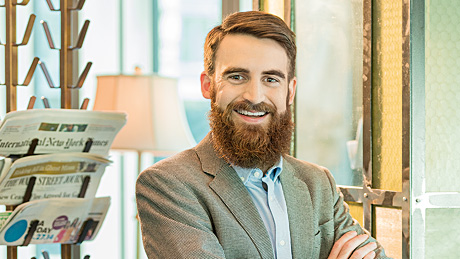 Elias Blum leapt at the opportunity to spend seven months at the Swissnex consulate in Boston, USA. The political scientist’s main task was to set up a UZH alumni network in New York City, which lacked an active group for University of Zurich graduates – unlike Boston, where a network already existed.

From the Boston office, Blum had to track down UZH alumni working all over the city of New York – which was easier said than done. While he managed to identify over 100 people via LinkedIn and Alumni UZH, obtaining their email addresses was a different story.

In the end, however, he was able to contact around 100 people, about 40 of whom expressed an interest in the alumni network, with some even offering to run it. Finally, during the festival Zurich meets New York, UZH president Michael Hengartner officially opened the UZH Alumni Chapter in the Big Apple. Not only did Blum’s hard work establish a network in the city: He was also a huge asset for the Swissnex consulate in Boston.

Blum can highly recommend the internship and is quite taken with Greater Boston, a center of innovation, where knowledge-hungry and adventurous people always have something to do. 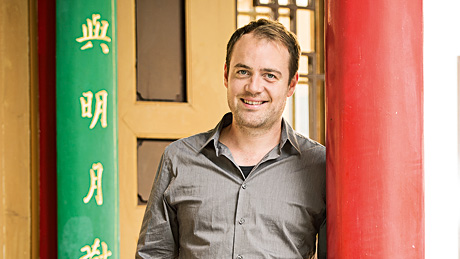 Niklaus Waldvogel was as UZH-ambassador in Shanghai. (Photo: Frank Brüderli)

China has long held a fascination for Niklaus Waldvogel. And the dynamic country with its countless universities is growing increasingly confident in its international presence in academia. Waldvogel, a physicist, wanted to experience this energy first hand during his six-month stint at the Swissnex office in Shanghai. The stay more than lived up to his expectations: The city with a population of around 15 million is buzzing, and the economic boom is almost physically palpable. The metropolis swarms with crowds of people and great tides of traffic, and its skyscrapers seemingly scoff at a Swiss perception of tall buildings.

While Waldvogel found the Chinese in Shanghai to be extremely warm, open people, it was not so easy to fulfill his mission of raising UZH’s profile. This is largely because the Chinese use their own online portals and not all of them have uncensored access to western networks. Genuine posts about UZH on popular portals such as LinkedIn or Facebook only reach a privileged minority in China. The intern had much more success in acting as a UZH ambassador at the numerous Swissnex events in Shanghai.

Because many Swiss companies are active in China and work to set up agencies or research activities there, such networking events are commonplace. As a result, the Swiss community in China is already fairly large, as is the Swiss interest in collaborating with Chinese technological and research institutions. The potential synergies open up an interesting sphere of activity for UZH and are something that should be exploited, says Waldvogel. After all, the network events present prime opportunities to better acquaint the Chinese with UZH and its excellent research and teaching.